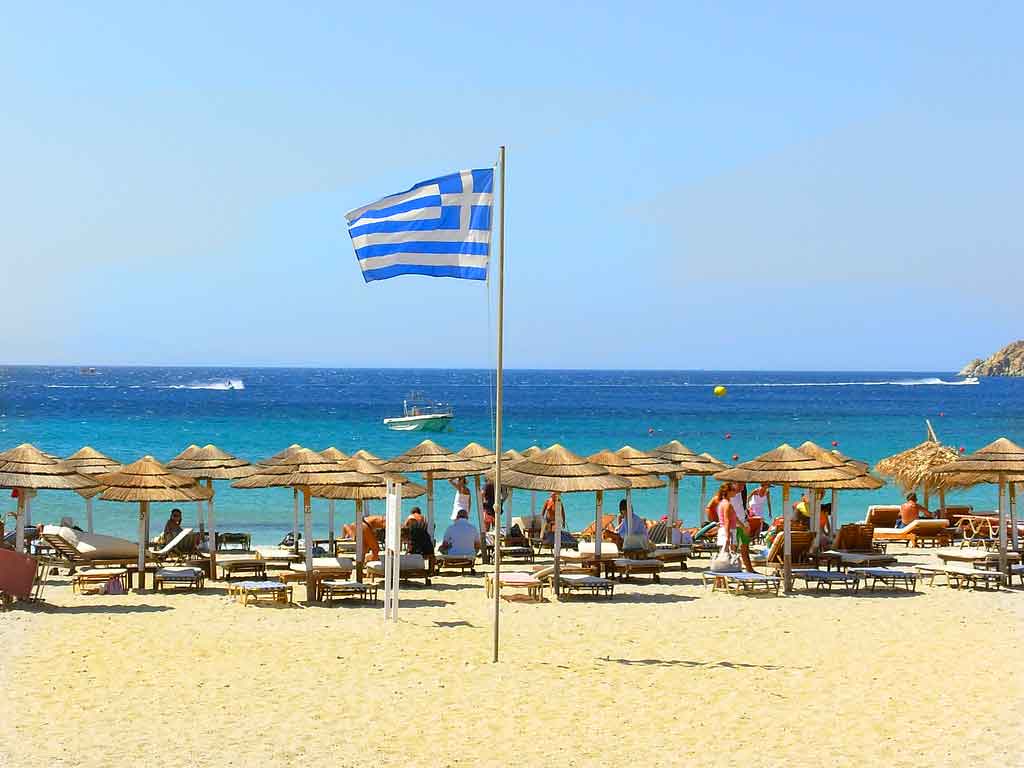 Mykonos beaches with the fine golden sand and the crystal clear waters will for sure seduce you!

There is a beach for every taste and mood. Nudists, party people, families, gay and also those seeking a break from the overcrowdedness of Mykonos.

The best beaches are on the south side of the island and sheltered from the prevailing northern wind. Many beaches, even the more family-orientated, are often populated with the ‘European’ style of sunbathing – i.e. topless. Most of the beaches have tavernas and restaurants and are well equipped with with deck chairs and parasols.

Some of the most popular ones are:

-Psarou, (south coast, 5km from Mykonos Town). This up market beach is popular amongst Greeks.

-Paranga, (south coast, 6km from Mykonos Town). Also popular with gays. Nudity is quite common, especially on the right end (facing the sea). At about 5PM the beach gets really noisy with several beach bars.

-Paradise, (south coast). Probably the most popular beach on the island. Nudity is quite common. Paradise Beach is known for its parties. At about 4PM the music will get really loud.

-Super Paradise, (south coast). Also very popular with gays, especially the right part (facing the sea). Nudity is quite common. At about 4PM the music will get really loud; for some time to leave, for others time to party.

-Elia, (south coast). Elia is one of the larger beaches on Mykonos. It is a well organized beach and various water sports (ski and jet-ski). Also popular with gays, especially the small rocky beach between Elia and Agari. Nudity is permitted but not as common as at Paradise, Super Paradise and Paranga.

-Ornos, (west coast, 3km south of Mykonos Town). Busy family and tourist beach. It gathers many for its sun beds and umbrellas. The sandy beach slopes gently into the sea.

-Agios Ioannis, (west coast, 3km south west of Mykonos Town) is a small beach with snorkeling opportunities. The beach never gets over crowded and deck chairs are available to rent.

There are several other magnificent beaches in Mykonos island that are more far away such as: Kalo Livadi, Agios Sostis, Panormos, Agrari, Kapari, Ftelia, Lia and many more…

We use cookies to ensure that we give you the best experience on our website. If you continue to use this site we will assume that you are happy with it.Ok